Finding hope in a hopeless world

The world has always been falling apart. Well, at least since Genesis 3. But there are times when we are far more aware of just how busted up we are in this world. This is one of those times. Those of us who work in the social services get a front-row seat at seeing individual, family, community, and society level brokenness.

Frankly, this vantage point tempts me to become cynical, skeptical, and in despair. Listen in on some of the thoughts we Christian counselors might have: people don’t change; leaders serve themselves; God doesn’t care… Out of this experiences, counselors may find themselves becoming complacent, settling for palliative care only (vs. recovery), or worse, using clients to sate their own appetites.

So, where do you find hope in an otherwise hopeless world?

Cynicism and skepticism illustrate conclusions we have made about our world. 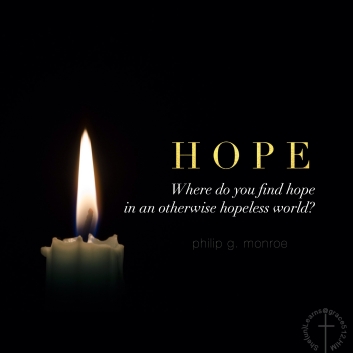 They illustrate that we have stopped looking for other data. Consider instead these three activities as a reminder and cultivator of the hope available to us:

Is it crazy to hope in this world? Absolutely. But the signs of birth are around you if you look. Notice in Luke 1 how Zechariah sings of present-tense salvation and redemption, even though Jesus is merely in utero. How much more ought we to be able to hope as we live in the age of the Resurrection.†

Why the Christmas story?

Why does Jesus enter the world as he does? His entry into the theodrama is both obscure and dramatic at the same time—obscure in that save but a few shepherds and angels no one witnessed or knew the significance of his first days. Yet his entry into the world could not be more dramatic and shocking. God is either a crazy, histrionic, attention-seeking God…or God wants us to see something he is willing to pull out the stops to ensure we pay attention.

His mother Mary was pledged to be married to Joseph, but before they came together, she was found to be pregnant through the Holy Spirit.

Truthfully, Jesus could have entered our world any way he wanted. He could have ridden an asteroid; he could have just appeared in the temple and shocked Zechariah out of his robes; at least he could have been born to royalty. But no, Jesus comes through a virgin teen girl from Galilee—about as nobody as you can get.

Because Joseph her husband was faithful to the law, and yet did not want to expose her to public disgrace, he had in mind to divorce her quietly.

This bit of Scripture is more unbelievable than a virgin birth. Mary should have been stoned to death. Joseph should have been the first to accuse in order to clear his family name from everlasting dishonor and shame. If he did not, he could have risked being stoned himself, because who would have believed him when he said, “it’s not my child”? Yet, he did not choose the path of his culture and even the path of the Law. Rather he chose first to be discreet and second to consider his dream to be from God. And if you think this is not dramatic enough, notice that Joseph not only got a quickie marriage to protect his wife but he also chose not to pursue certain marital privileges until after the birth of Jesus—more signs that God wants to show us something dramatic is taking place.

Impossibly dramatic. But wait, there is more to come.

Whether to escape local gossips or out of desire to comply with a command from a distant Roman emperor, Joseph decides to take pregnant Mary and travel about 100 hundred miles south to Bethlehem. There Jesus is born, not in the safe and warmer confines of a house but in some shelter designed for animals.

She gave birth to her firstborn, a son. She wrapped him in cloths and placed him in a manger, because there was no guest room available for them.

Laid in a trough. If you’ve ever been in an active barn…consider the smell! Impossibly dramatic.

Surely now, the story can follow a straight line. King Jesus is on earth and soon will take his rightful place, recognized by all. No, we are not quite there yet. A bit more drama is coming.

An angel of the Lord appeared to Joseph in a dream…”take the child and his mother and escape to Egypt.”

Virgin birth, unusually protective fiancé, musty stable, and now we add to the story this: refugees fleeing in the middle of the night to former enslaving Egypt to avoid certain death. Can it get more dramatic? Frankly, it did. Imagine travelling on foot or donkey to Egypt from Bethlehem today, even with our helpful gadgets. It would be most dramatic, worthy of a best-seller!

So, why does Jesus enter the world like this?

It seems to me that God is trying to tell us at least two things.