[June 27, 2013]. Day two of our three day conference. Today Dr. Barbara Shaffer talked about the problem of marital rape and reviewed 6 common characteristics of some abusive spouses. The participants were very involved in this presentation and the discussion about sex in marriage provoked some interesting debates among the group. The large group discussed the matter of dowry. In Rwanda, a husband’s family agrees to pay an amount to his bride’s family. The price is in terms of a number of cows. A friend told me that nowadays, “cows are kept in the bank.” This tradition gives many men the belief that they have purchased their wife. Now the wife is his (cherished) property. As such, he has rights to her body. Based on the conversation, I would argue that the concept of marital rape might indeed be foreign. One participant asked how 1 Corinthians 7 fit into this discussion. We were able to examine that this passage offers women the right to control their husband’s bodies just as much as he gets to have a say about her body. Not being sure where everyone stood in the debate, I concluded with a reminder that Philippians 2 requires that we emulate Christ in not demanding what we are due but giving it up so as to shine like stars.

After lunch Dr. Langberg presented on dissociation and a group of Rwandan counselors illustrated a counseling scene of dissociation and a counselor’s techniques in calming and grounding. Very well done! Just before the end of this day’s training, Rowan Moore gave a talk about child abuse. 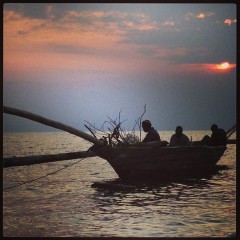 Before dinner, we hired a local young man to take us out onto Lake Kivu in his boat. Ten of us motored out toward Peace Island. We didn’t have enough time to go all the way to Napoleon Island but we rounded several small islands and enjoyed the setting sun. We passed several fishing boats netting the tiny fish that are in the lake. We could feel the stress of the day fade with the lap of the waves. [photo courtesy Laura Captari]

After dinner, we had an evening of celebration. We identified our Barnabas’ (each person secretly wrote notes of encouragement and prayer to another). And of course, there was dancing and laughter. I have come to love the fluid hand motions during dancing and the energetic movements of men and women. Sadly, I  cannot dance to save my life. I have not rhythm. Of course, there was a dance where I had to be front and center. I tried hiding behind a camera but even that did not save me. Still, it was sweet medicine after 2 days of talking trauma, abuse, and violence.