Awoke in the night with what is likely travel bug “sickness.” It is never fun being sick when away from home and doubly so when in as far away as another continent. Thankful for things like Cipro that can treat the symptoms quite quickly. While awaiting for my system to calm itself down I was reading in John. I’m struck by how skeptical many were of Jesus. The tendency to skepticism is quite profound and alluring even. It makes me feel intelligent and wise when I am skeptical of whatever everyone else is enamored with. However good it is to be skeptical of human promises and motivations, when we apply that to God’s activity we are dangerously wrong. Our problem is that we are not that good in discerning God’s vs. human activities on first blush. We often mis-attribute human behavior to God and vice versa. And we learn over and over that God uses the foolish to teach the wise. 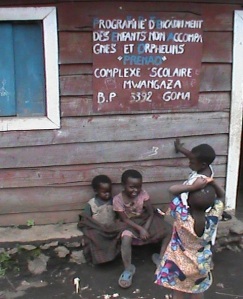 This day started out with a glorious sun.  We traveled to the “Shining School Complex” where they teach 193 children, mostly orphans. This school, at the very edge of the airport, is a set of dingy buildings with a dirt/lava rock play area. There we gave out illustrated bibles in French to the children. These children live in abject poverty and for most this was their first very own book. At one point I got down on my haunches and began looking at the pages with one child. Pretty soon I was mobbed and had to get up so as not to be trampled. They crave the attention. After standing outside for well over an hour, I’m reminded how pasty I am and realize I will be having a sunburn later.

We then moved on to “Mama Jeans”, an orphanage and place for raped women to live. As we entered the compound we were met with singing and dancing. The feelings I had were quite mixed. I was in near tears by the sounds and the image of these impoverished people singing for us but also uncomfortable. Something didn’t feel right about the singing. Their bodies looked joyous but their eyes were dead. We saw the clothing that the widows and single mothers were making–men’s and women’s shirts, baby clothes and baskets. While there we heard the stories of several rape victims. A young mother who was a sexual slave of some soldiers from the ages of 6 to 15. She escaped, while pregnant, after seeing what happened to a friend of hers who was also pregnant. Later, after giving birth, she went back to her village only to be raped again and impregnated. Another told us of giving birth to triplets after rape. She had the

children with her. Another was dying of AIDS.

Late in the afternoon, we made our way across the city to see the conclusion of ABS’ trauma healing training. They use Healing Wounds of Trauma and spend the week training a small group of facilitators. Leading the training is Harriet Hill (ABS) and Margaret Hill (SIL), two of the authors of the book and seasoned trainers. This group of trainees was actually only half of the group. The other half was still in distant Isiro. The story of why the group was split up gives you a sense of Congolese life. Here it is. The entire group was in Isiro (some hours by flight away). The trainers learned that their tickets out were no longer valid and that the next flight would be 1 week later. Why were they not valid? Like Jerry Seinfeld’s show, sometimes a reservation isn’t a reservation. The seats had been sold to someone else. But, they could leave the next day if they wanted to get out early. So, instead of waiting a week, they brought half the class to the airport and were going to finish up the training in Goma. The group arrives at the airport and waits. And waits. The plane never comes. Something to do with the fact that the Congolese army comandeered the flight to send either soldiers or supplies elsewhere. Thankfully, the next they were able to fly out to Goma and finish the training.

We ended the day by having a late dinner of brochettes and some sort of cheese sticks. As I left the restaurant and headed up the stairs to my room, a young Congolese woman grabbed my hand and began to introduce herself to me. Seems she wished to make my acquaintance. Didn’t take me much time to size up the situation. Skin tight jeans and significant cleavage, something not seen in the Congo to this point. I retrieved my hand from hers and excused myself. This may be a common event as there are many UN contractors in our hotel and my room came with a supply of condoms. Rather uncomfortable feeling.